The primary mission of every CanSat is to measure the temperature and the air pressure as well as to transmit this data to a ground station. The ground station should display the data received in an altitude profile. Every team also needs to complete a self-developed secondary mission. That mission may consist of further measurements, for example, or an experiment. It should also have a scientific or social benefit.

The idea for our secondary mission came from the problem faced by satellites orbiting close to earth: they can only communicate with the ground station by radio for a limited amount of time because the transmission gets blocked by the earth itself.

In order to avoid this problem, so-called geostationary satellites are used to establish a radio relay system (in addition to their regular function).

Geostationary satellites are satellites at high altitudes (35,880 kilometres) above a certain point on the earth’s surface.

As a result they can maintain a stable distance from the earth and orbit the earth as it rotates over a 24 hour period.
Our satellite plays the role of a geostationary satellite in this szenario. 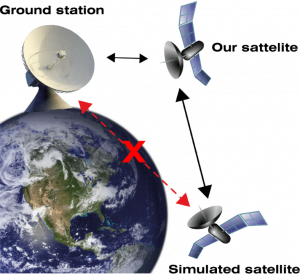 Another goal of the secondary mission is the locating of the current position though an orientation and acceleration sensor. To achieve this the sensor needs to be able to deliver the data fast and accurate at the same time.
The position will be calculated in the satellite which then send it to the ground station. This allows us to locate the satellite through our GUI (Graphical User Interface) and the Google-Maps-API.